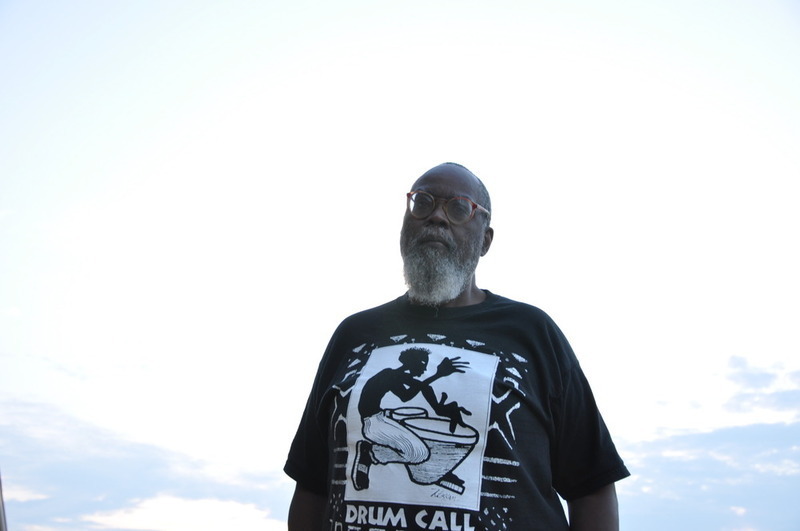 THE MOMENT OF THE FIRST DAY

people get married all the time. but not in congo square. eight o’clock in the morning — there is a softness about that time of day in place de congo, the sun has not yet risen past the trees, barely cleared the rooftops of nearby buildings. the birds have recently finished feeding and are chirping their contentment.

though this late may morning is early summer, the atmosphere is still pleasingly cool. instead of a breeze, the new day gently air-caresses like a lover alternately kissing and blowing unhurried exhales on intimate skin through partially parted lips. big, full smiling lips. laughing lips. tickling. lips. like that.

there are moments when romance is real. when every little thing really is alright. when people do lean close and be touching—admittedly rare but nonetheless simply beautiful.

i quietly draped my arm over nia’s shoulders and cozied close. whispered something, anything.

i wonder how many lovers danced together here during slavery times, here on this meeting ground just outside what was then the city proper, beyond the ramparts, the city’s earthen defense line, out on the plain next to the bend in the canal where the houmas and choctaws came to trade, and where our enslaved ancestors assembled to barter food and handicrafts, and to make music, sing and dance?

i wonder how many lovers met here, secretly in public—secretly because their “masters” didn’t know the full import of these assemblies, didn’t know the get togethers were also trysts. and in public because the community of captives all knew juba loved juline, were aware elise was dancing for cudjoe, and had no doubt that esmé with her brown eyes round as spanish coins cast shyly toward the ground was glowing in the spotlight of josé’s focused stare as her slow twirling kicked up bouquets of dust. how many black hearts have been entwined here?

who can know the specific answer? look. we are still meeting here without the consent of the authorities — we woke up, journeyed here howsoever we travel, and voila, requesting no permit, we gather a community of lovers. love needs no permission, and certainly black love requires no government approval.

true beauty is elegant, a curved exhilaration without an iota of wasted motion or excessive flash. moreover, in an african aesthetic, elegance includes rhythm.

a straight line is monotonous, rhythmless. rhythm is but another name for diversity in motion, and in form, diversity is the curve. hence there are no straight lines on a beautiful human body, every would-be straightness arcs, curves.

cassandra is all curves. even ric with his honed physique, his steel-cabled arms, rippled with veins and muscular development: curves.

senghor said, the negro abhors a straight line. i would add, so does nature, and i would rather be in tune with nature than with rational abstractions. even light bends under the influence of gravity.

moreover, beyond the arc and the lean, when dealing with the human, surface prettiness alone does not give you beauty. physical perfection without inner warmth is cold, and all real human beauty is warm, reflects the rush of blood, the healthy heat of a passionate body, a beating heart…

cassandra is covered shoulder to toe in a sheath of dusky sorrel material embroidered with a flowered pattern in deep violet. she is holding a bouquet of velvety orchids in what appears to be an invisible basket: the soft off-white blossoms with delicate purple highlights dangle in an arrangement shaped like a stunning cluster of semi-sweet concord grapes. sand’s toenails are lacquered a burgundy to match the purplish-red (or is it reddish-purple) of her form-fitting, backless dress.

ric stands on two feet but leans majestically like a pine tree seeking sunlight. he is wearing cream (shirt) and brown (slacks), and i mean “wearing” those colors, in fact, he is wearing them out. plus, his skin has the smooth darkness of a country midnight. he is smiling without moving his lips. the luster of his skin is smiling. i imagine his eyes are smiling, but i cannot see his pupils through his shades. even the men are admiring how beautiful ric is. the women look at him and hold their breath.

i bet you two centuries ago, in 1799, on some may day a cool black man stood next to the enchanting winsomeness of a saucer-eyed, dark brown erzulie and their community of friends gathered around them. and smiled deeply felt, seriously contented smiles just like we are smiling now.

the formal ceremony, such as it is, is extremely brief—not much was rendered to ceasar on that morning. carolyn jefferson administered the vows and signed the paper the state uses to hold one legally accountable. but the real signification of commitment came not from a mark on paper but from a leap over a rod.

sand’s friend vera had crafted a broom done up in french vanilla-colored raffia wrapped on the handle and outer straws spray painted dark purple (what a soothing combination). the matrimonial staff lay in the dust between pale, pale yellow candles. ric lights one, sand lights the other. they stand. hold hands. and jump.

why would educated individuals carry on a tradition from slavery?—only those who don’t believe in either ancestors or community would ask such a hopeless question. only those removed from the security of community would sneer at jumping the broom. to jump together is not a reminder of slavery, but rather a declaration of self-determination.

afterwards we all went over to ric&sand’s apartment. we set up tables on the sidewalk, chairs on the front porch, and played music inside the house—hard wood floors, shiny with hand applied wax, buffed to an eat-off-the-floor sheen. candles in every room, flickering, some of them scented. here the quiet has a presence you can not ignore, like a precocious child, grinning, hands behind the back: guess what i got, and she stands before you until you tickle her or until he flashes deep dimples and covers his mouth where his front teeth are missing. inside ric&sand’s shotgun apartment, the rooms were happy like that.

the walls were bare except for strategically placed photographs hung in carefully selected frames. one frame is green wood. there are two pictures. sand at two with a hat slanted jauntily on her head, and a boyish ric that looks just like mannish ric except the clothes are smaller and from an earlier era. but even then the angle of a budding lean is obvious.

there are trays of food on the tables prepared by a local african restaurant: plantain, a spinach dish called jama-jama, a coconut rice, and chicken on skewers with a red sauce on one table, fruit and drinks on the other. a gigantic multi-fruit cream tart in a white cardboard box (the pastry didn’t last beyond a quarter hour).

we started the reception with nuptial toasts (libationally, i poured a sip of my juice at the foot of a tree). then we read poems and afterwards toasted some more. sand’s friend vera impishly offers: here’s mud in your eye. we all laugh. most of us are black, but there are latinas here and a sprinkle of americanos who thankfully think of themselves as human rather than the aggressive/impossible purity of white.

if you passed us that morning, people lounging on the porch, sipping on juice or beer or wine or sucking the nectar from cold watermelon and chilled cantaloupe, if you had seen us you would have thought this was one of those impressionistic paintings of happy darkies deep in the south circa some idyllic antebellum era, except, we, of course, were culturally afro-centric, in love with life and each other, savoring the day and dreaming about nothing but a peace-filled future.

around three in the mid-afternoon, people begin drifting off, their spirits thoroughly rejuvenated, satiated and smiling. before leaving, we exchange hugs. everything beautiful deserves to be embraced.

so this is how we avoid insanity and suicide. we fly to love.

i had been thinking about ric&sand’s upcoming marriage as i drove around the city. that’s when an image gathered me into its center. you know how you will see something, know that the image is important but not be able to figure the specific meaning. this happened to me a day or so before the wedding. what i wrestled to understand then, is now so clear.

in urban climes free beauty is seldom seen. amid regimentation disguised as daily life, true beauty appears but briefly. we spend eight hours working, a hour in transit to and fro the yoke, another hour or so trying to cool out from the yoke, maybe two hours doing things we need to do for the house but can’t do cause we be at the yoke, and, of course, we spend at least six hours sleeping to get ready for, yep, the yoke. the yoke ain’t no joke. and we really think we are free?

actually, we are so harassed by being city dwellers in postmodern america that we can hardly be sure what we would be like if we were unyoked, what we would discover in the world. who knows how hip we would be if we were unyoked. at the reception i joke on the porch: if i was in charge, this (sweeping my eyes across the array of relaxing black folk, couples snuggled up, singles sipping red dog or nibbling on jama-jama), this would be what monday is like. well.

i have never before seen uncaged green birds flying through the blueness of crescent city skies. the rare wonder of such a sighting almost made me doubt myself. did i actually spy three pea green streaks threading through the plain of weekday? after all, i could have been delusional. optical illusions are far more common than the miracle of genuine beauty on the wing. maybe it was pigeons. maybe i was sun blinded. the day so bright, maybe my sun-stabbed eyeballs were incapable of clarity. maybe my perceptual acuity had been mutated into fantasy and silliness.

nah, i was there. clearly these creatures were flying. whatever they were. zip and gone. but that is the way of life in the urban jumble. anything original is rare. everything self-determined is even rarer than originality — and undoubtedly love and beauty had to be on the fly, dodging the black and white manacles of what this society pretends is the lassez faire of living color.

people get married all the time, but rarely is there this much love quietly shared. these are the days we shall surely remember, the gauge we shall use to determine how good is whatever the next goodness we encounter.

thank you ric&sand, for a moment, for a morning when the universe was beautiful, and peace and love were more than a slogan optimistically signed at the end of a desperate love letter sent to someone far, far away.