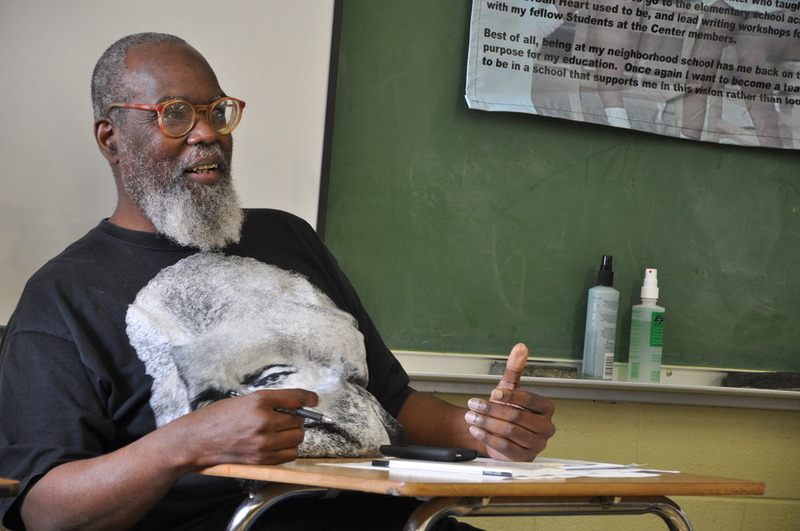 The guest this week is Kalamu ya Salaam, a leading literary figure in New Orleans, whose latest book is entitled "What Is Life?" We talk about the meaning of Katrina, and he offers a poem about beauty at the end.

This interview was conducted late October 2005.

Eleanor McMain High School is a massive turquoise-and-cream Uptown building that was freckled in mold long before last August’s flood. Inside its walls, Kalamu ya Salaam is engaging in what he says is a revolutionary act. He is teaching creative writing to public school students. This is where the fifty-nine-year-old poet, playwright, activist, publisher, and one-time executive director of the New Orleans Jazz & Heritage Foundation devotes most of his afternoons these days. He works through Students at the Center, an independently funded, public school-based initiative that he co-directs with longtime teacher Jim Randels.

When one student turns to Salaam for approval after sharing her latest writing, her hopeful gaze just seems to bounce off her teacher’s thick, round glasses. Instead, Salaam cajoles other students into the conversation. The answers aren’t with me, he says repeatedly, they’re with you.

The results are striking and varied. Some students this afternoon are harsh and polemical; others are lyrical and reflective. Salaam finally coaxes one reticent student to read aloud a poem he wrote about a father he never knew. The poem returns again and again to the phrase “This man is not who I am,” a line that builds in conviction even as the student buries his head in his paper as he softly reads.

“Kalamu doesn’t shy away from pushing people to go really deep,” says Randels, who frequently co-teaches with Salaam. “He’s good at making students comfortable, but at the same time he’s going to their sore spots, their sad spots, their angry spots.”

Post-Katrina New Orleans is a rash of sore spots. In the immediate aftermath of the flood, Salaam’s was one of the clearest voices denouncing the lethal, malignant neglect that residents faced. He’s still at it.

“In the long run, New Orleans is doomed, unless there’s a major turnaround in how the environment is dealt with,” he says. “I really don’t see that happening.”

This is not the language of a city reaching for optimism, where fleur-de-lis flags now fly from freshly gutted houses. Those kinds of symbols get you nowhere, Salaam says. “That’s the desperation of survivors. They want to hold on to whatever their image of New Orleans was. That’s gone. We can forget that. There’s a new New Orleans now.”

So what would he most like to see in the new New Orleans? He’s got a ready answer. “The President’s head on a stick in Congo Square,” he says, referring to the city’s historic gathering place for slaves. “And right next to that, the head of the mayor.”

Salaam explains: Only a revolution will truly change things. But he acknowledges that in New Orleans today, a city still emptied of so many of its citizens, the dream of revolution—or even an effective political movement—is more deferred than before. “You can’t have grassroots activity if you ain’t got no grass,” he notes dryly.

He also understands that a mental health crisis has now engulfed the city, a crisis he warned about early on. In recent months, he says, he’s had to drive friends to the hospital to be diagnosed with depression. “There’s a very heavy thing of having to deal with illnesses in ways that, prior to Katrina, we didn’t have to deal with so intently,” he says. “But people don’t directly link it to Katrina.”

Which brings him to his second major line of work since the storm. “Listen to the People” is an ongoing web-based oral history project that Salaam is organizing. He says it is partly inspired by the Works Progress Administration’s slave narratives. When completed, the dozens of lengthy “Listen to the People” interviews—many are two to three hours long—will provide counter-narratives of the storm, levee failures, and evacuation. They’ll be online to see and hear.

“When we started, I wasn’t thinking about now as much as I was fifty years from now,” he says. “I don’t want the federal government’s version, the state government’s, the city government’s, or even The Times-Picayune’s, to be the only versions that are easily accessible.”

None of this work is really a departure for Salaam. Born Vallery Ferdinand III, Salaam was greatly influenced by his mother, Inola Ferdinand, a public school teacher and union activist. (“I have her hands,” he states in one poem dedicated to her.) Following his work in the 1960s with the Free Southern Theatre, where he collaborated with fellow black artists Tom Dent and John O’Neal, Salaam kept active as a writer. His poetry anthology, From a Bend in the River: 100 New Orleans Poets, was published in 1998 by Runagate Multimedia, which he co-founded. Its mission is to promulgate “New Orleans culture and African heritage cultures worldwide.” He’s now co-editing The End of Forever: New Orleans Poets Post-Katrina, due out later this year by Runagate.

In all of his work—but perhaps most of all in his teaching—Salaam is amplifying voices that might otherwise go unheard. “Part of the Students at the Center approach is to appreciate that students have experiences that are valuable and instructive,” Randels says. “They’re beginning to see that what they’ve been through and the way that they write about it can inform other people, and their peers. Then they begin to work as resources for other students.”

Students at the Center is a model for instruction within the New Orleans public school system—a success story that doesn’t get much play in a district that is now mostly either state-run or charter schools.

Salaam recognizes the challenges he and New Orleans face. But he is not deterred.

“How does it feel?” he asks about his changed city. “It doesn’t feel good. But we got a lot of people who are still here. I’m not sure how long I’ll be here. But I’m here now. And while I’m here, I’m going to do what I can.”

Michael Tisserand’s new book, “Sugarcane Academy,” is due out next spring. He is the former editor of Gambit Weekly in New Orleans.