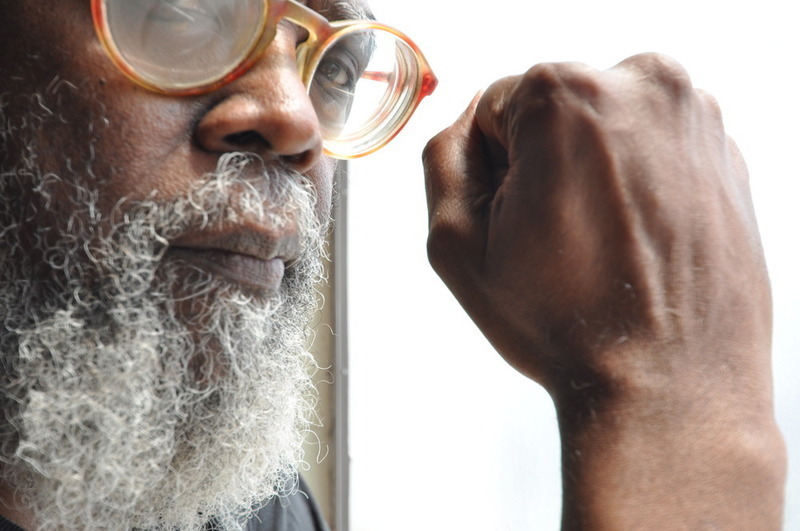 I Do Not Protest, I Resist

Like most writers, figuring out how to economically support myself is a major problem. I have worked as an editor, as an arts administrator, and as the co-owner of a public relations, marketing and advertising firm. I have freelanced on projects ranging from $10 record reviews to commissions from publishers. Economy necessity is a major influence on what I write.

I have written commercials whose messages I personally reject like a radio jingle for a Cajun meat-lovers pizza when I don't eat red meat. Of course, like many others, while I try to steer clear of  major contradictions, I have done my share of hack work.

Doing what one must in order to survive is one major way in which the status quo effectively shapes us. As a writer, money making options are surprisingly limited. We all know and face the wolf of survival. There is no news in that story.

But wolves run in packs, and survival is not the only predator. There is also our own desire to succeed—I remember reading about "the fickle bitch of success" and wondering why was success described as a "bitch." I have my own ideas, but that's a different discussion.

Success is a very complicated question. We can easily dismiss "selling out" our ideals for a dollar, but what we can't easily dismiss either in principle or in fact, is that we all want our work to reach the widest possible audience. On the contemporary literary scene, reaching a wide audience almost requires going through major publishers. Participation in the status quo makes strenuous demands of our art to conform to prevailing standards, one of which is that the only overtly political art worthy of the title art is "protest art".

Capitalism loves "protest art" because protest is the safety valve that dissipates opposition and can even be used to prove how liberal the system is. You know the line: "aren't you lucky to be living in a system where you have the right to protest?" Without denying the obvious and hard won political freedoms that exist in the USA, my position is that we must move from protest to resistance if we are to be effective in changing the status quo.

The real question is do we simply want "in" or do we want structural change? Most of us start off wanting in. It is natural to desire both acceptance by as well as success within the society into which one is born. But, in the immortal words of P-funk President George Clinton: "mind your wants because someone wants your mind." Those of us who by circumstance of birth are located on the outside of the status quo (whether based on ethnicity, gender or class), face an existential question which cuts to the heart: how will I define success and is acceptance by the status quo part of what I want in life?

While it is simple enough to answer in the abstract, in truth, i.e. the day to day living that we do, it's awfully lonely on the outside, psychologically taxing, and ultimately a very difficult position to maintain. Who wants to be marginalized as an artist and known to only a handful of people? Given the choice between having a book published by a mainstream publisher and not having one published by a mainstream publisher, most writers (regardless of identity) would choose to be published, especially when it seems that one is writing whatever it is one wants to write.

Without ever having to censor you formally—after a few years of rejection slips most writers will censor and change themselves—mainstream publishers shape contemporary literature by applying two criteria: 1. is it commercial, or 2. is it artistically important. Either will get you published at least once, although only the former will get you published twice, thrice and so forth.

Unless one is very, very clear about one's commitment to socially relevant writing, even the most revolutionary writer can become embittered after thirty or forty years of toiling in obscurity. As a forty-seven-year-old (this essay was written in 1994) African American writer, I know that if you do not publish with establishment publishers, be they commercial, academic or small independents, then you will have very little chance of achieving "success" as a writer.

I sat on an NEA panel considering audience develop applications. One grant listed Haki Madhubuti as one of the poets they wanted to present. I was the only person there who knew Madhubuti's work. I was expected to be conversant with the work of contemporary writers across the board. But how is it that a contemporary African American poet with over three million books in print who is also the head of Third World Press, one of this country's oldest Black publishing companies, was unknown to my colleagues? The answer is simple: Madhubuti is not published by the status quo. He started off self publishing, came of age in the 60s/70s Black Arts Movement and is one of the most widely read poets among African Americans but all of his books have been published by small, independent Black publishers.

Too often success is measured by acceptance within the status quo rather than by the quality of one's literary work. That is why we witness authors proclaimed as "major Black writers" when they have only published one or two books (albeit with major publishers) within a five year period. There is no surprise here. My assumption is that as long as the big house stands, "success" will continue to be measured by whether one gets to sleep in big house beds.

There is a long tradition of African American protest art, especially in literature. As a genre, the slave narrative emerged as an integral part of the white led 19th century abolitionist movement. One major purpose of the slave narratives was to address Christian senses of charity and guilt—charity toward the less fortunate and guilt for the "sin" of supporting slavery.

But even at that time there was a major distinction to be made between abolitionist sentiments and charity work on the one hand, and, on the other hand, active participation in the armed struggle against slavery, which included participation in the illegal activity of the underground railroad and support of clandestine armed opposition. This meant fighting with the John Browns of that era or joining the throng of insurgents storming court rooms to "liberate" detained African Americans who had escaped from the south and were then ensnared in the web of the Northern criminal justice system which continued to recognize the "property rights" of Southern slave owners.

While the issues of today are no longer revolve around slavery, the distinction between protest and resistance, between charity and solidarity, remains the heart of the matter at hand. To protest is implicitly to accept the authority of the existing system and to appeal for a change of mind on the part of those in power and those who make up the body politic. To resist on the other hand is to fight against the system of authority while seeking to win over those who make up the body politic. "Winning over" is more than simply asking someone to change their mind, it is also convincing someone to change their way of living.

In the 50s and 60s a debate raged among Black intellectuals about "protest art". Ironically, one of the chief opponents of protest art was James Baldwin—"ironically" because over the years the bulk of Baldwin's essays, fiction and drama can be read as a "protest" against bigotry and inhumanity, as a plea to his fellow human beings to change their hearts, minds and lives.

When Baldwin started out he wanted to be "free" and to be accepted as the equal of any other human being. He did not want to be saddled with the "albatross" of racial (or sexual) themes as the defining factor of his work. Yet, as he lived, he changed and began to voluntarily take up these issues. I believe life changed him.

The reality is that we can not continue to live in America with the social deterioration, mean spiritedness, and crass materialism which is polluting our individual and collective lives. We are literally a nation of drug addicts (alcohol and tobacco chief among our drugs of choice, with over-the-counter pain killers and headache remedies running a close third). We are suffering horrendous rates of violence and disease. There is a widening economic gap at a time when many of our major urban centers teeter on the brink of implosion: aging physical infrastructures such as bridges, sewer systems, housing; corrupt political administration; and increasing ethnic conflict. Something has got to give.

My position is simple, we live in a period of transition. We can protest the current conditions and/or we can struggle to envision and create alternatives. We can plead for relief or we can work to inspire and incite our fellow citizens to resist. As artists, we have a choice to make. Indeed, there is always a choice to make.

Resistance art requires internalizing by an audience of the sufferers in order to be successful. The horrible truth is that every successful social struggle requires immense sacrifices, and the committed artist must also sacrifice—not simply suffer temporary poverty until one is discovered by the status quo, but sacrifice the potential wealth associated with a status quo career to work in solidarity with those who too often are born, live, struggle and die in anonymous poverty.

We think nothing of the millions of people in this society who live and die without ever achieving even one tenth of the material wealth that many of us take for granted. We think nothing of those who are literally maimed and deformed as a result of the military and economic war waged against peoples in far away lands in order to insure profit for American based billionaires. Somehow, while the vast majority of our fellow citizens are never recognized by name, we artists think it ignoble to live and die without being lauded in the New York Times.

But if we remember nothing else, we should remember this. Ultimately, the true "nobility of our humanity" will be judged not by the status quo but by the people of the future—the people who will look back on our age and wonder what in the world could we have had on our minds. Protest is not enough, we must resist.